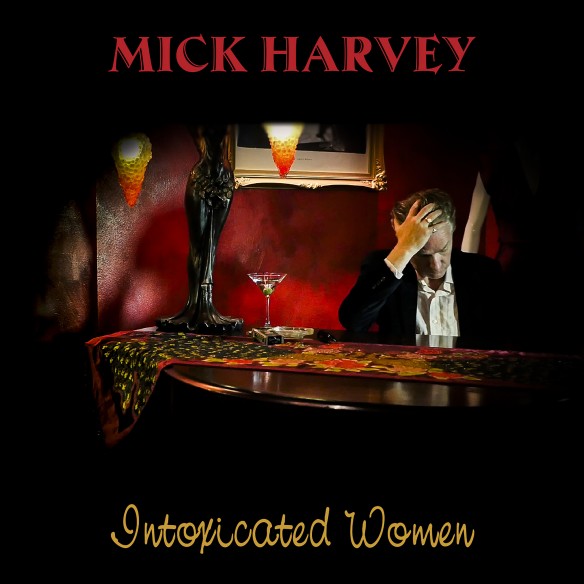 2. All Day Suckers (Les Sucettes) – with Mick Harvey on vocals

“‘Intoxicated Women’ mainly concentrates on the duets and songs written by Gainsbourg, mostly during the 60s, in a period where he was focusing his songwriting on singers such as France Gall, Juliette Greco and most famously, Brigitte Bardot.

‘Intoxicated Women’ opens with a stunning version of ‘Je T’aime… (Moi non plus)’ – here titled ‘Ich Liebe Dich… (Ich Dich Auch Nicht)’ – rendered in the sexiest imaginable German by the divine Ms. Schroeder and culminates with ‘Cargo Cult’, the closing track from the classic ‘Melody Nelson’ album. In between we are treated to a smorgasbord of Gainsbourg gems in English (with a bit of Khmer thrown in).

“After the initial recordings for ‘Delirium Tremens’ JP Shilo and I continued investigating the duets and female songs, many of which were unknown to me. So it became a voyage of discovery into quite a lot of material I hadn’t heard before. There are even a couple of songs for which the only versions existing from the 60s are from TV performances Serge gave.” [‘The Drowned One’ (La Noyée) and ‘Wolfy Teeth’ (Dents de Lait, Dents de Loup)]

A recent reissue of Vol. 1 and 2 rekindled Harvey’s interested in the Gainsbourg translations and 20 years after the release of Vol. 1 – ‘Intoxicated Man’, work began on what would become Volumes 3 and 4. Recording in late 2015 in Melbourne with J.P. Shilo and the rest of his Antipodean-based live band, 10 songs were tracked at Birdland Studios. The project then relocated to Berlin where a further 9 songs were recorded with Toby Dammit (The Stooges, Residents) and Bertrand Burgalat (of French label Tricatel) who was the string arranger on the first 2 volumes.

The resultant recordings served to whet Harvey’s appetite for more and almost immediately work continued back in Melbourne in order to have enough material to fill 2 new volumes. Along with principle musical collaborator, Shilo (with whom Harvey also worked on Rowland S. Howard’s ‘Pop Crimes’) and Melbourne based musicians Glenn Lewis and Hugo Cran, Harvey enlisted the aforementioned female singers to help complete this final volume in the series.” Mute Records